In this post we will see how large data is stored in multi-dimensional arrays, which is also called as tensors.

Tensors are used by Machine Learning systems to store the data. Do you know Google’s Tensorflow is named after Tensors.

Tensors only stores numerical data and you have seen like for Machine learning modelling even the text data are converted to Numerical features for processing.

Tensors are like Matrices but with Arbitrary number of Dimensions.

Let’s start in this order Scalar, Vector and Matrices

Scalar is a numerical value and contains one value and thus called a Zero-Dimensional Tensor. In Numpy a float32 or float64 number is a scalar tensor.

Vector quantities are those physical quantities which are characterized by both magnitude and direction.

An Array of numbers represents a vector, which is also called as 1D Tensor.

Let’s understand this with the help of example:

This array of number is a Vector with six data elements and therefore it is called a 6-dimensional vector.

A Matrix has two axes rows and columns so it is a 2D Tensor because it contains two axis. The other definition is array of vectors.

So the above Matrix is a 4x3 i.e 4 rows and 3 columns. Let’s take a look at some higher dimensional matrix

This is a 3D Tensor or a Matrix of 3 Dimensions. In Deep Learning we will be manipulating such high dimension matrix through each layers

So there are two important attributes of any Tensor:

So what does it means, This MNIST dataset is a 3D Tensor because it has 3 axes and more precisely it’s an array of 60,000 matrices of 28x8 integers. Each such matrix is a grayscale image, with coefficients between 0 and 255 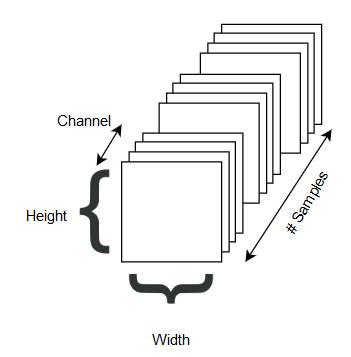 Images are built to have three dimensions: height, width, and color depth.