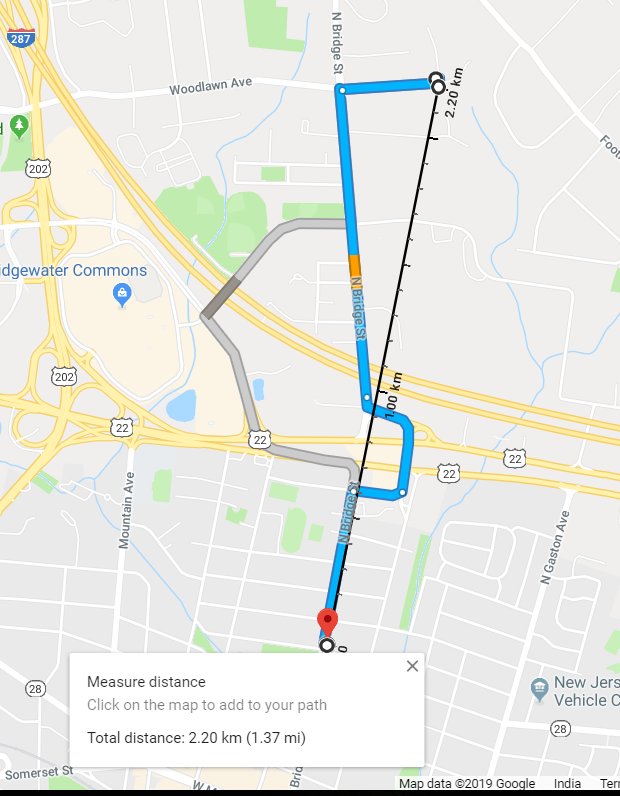 Here are three abstractions which is considered for calculating the distance between two lat and longs:

To calculate the distance between two points there are two popular algorithm Haversine and Geodesic distance is used:

Let’s talk about the tool or methods used to calculate these distances. I am going to first show how to use MYSQL geospatial query libraries to calculate this distance and then we will see how to write code in Python for Haversine and Vincenty Formula to calculate the distance between two lat/longs using Geopy module.

This returns the minimum spherical distance between two points or multipoints arguments on a sphere in metres. The points has to be entered within the following range:

Spherical distance between Oklahoma City and Norman in Oklahoma 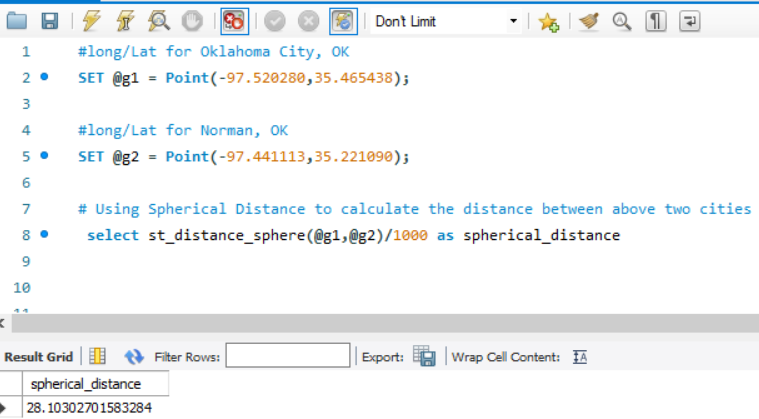 The Spherical distance between OKC and Norman is 28 Kms calculated using MYSQL st_distance_sphere formula. The st_distance_sphere gives the distance in metres and that’s the reason I have divided it by 1000 in the Select Query to get the result in KM.

Let’s see how Google Calculates the distance between these two cities: 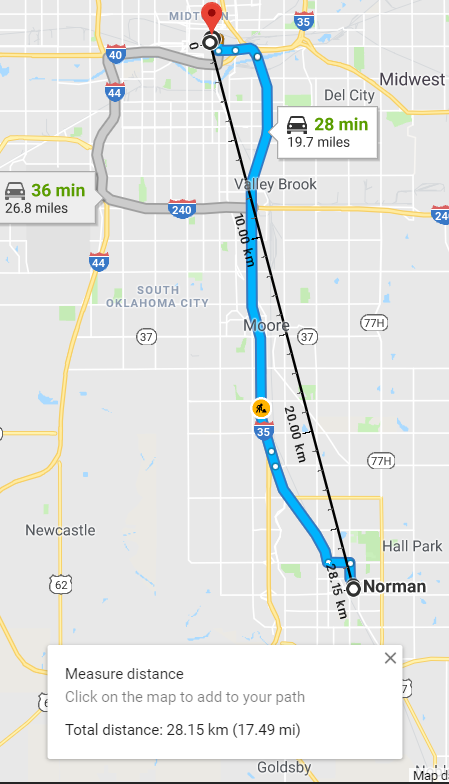 This method also calculates approximately the same distance as Spherical distance calculated using MYSQL and Google Maps. The calculated value is in Degress and to convert that to KM I have multiplied the result by 108 (i.e. radius of earth 6371*pi/180).

As per wikipedia,The haversine formula determines the great-circle distance between two points on a sphere given their longitudes and latitudes. Important in navigation, it is a special case of a more general formula in spherical trigonometry, the law of haversines, that relates the sides and angles of spherical triangles.

This distance is also same as the Google distance and the distance calculated by MYSQL.

The geodesic distance is the shortest distance on the surface of an ellipsoidal model of the earth. The default algorithm uses the method is given by Karney (2013) (geodesic)

Let’s try out a simple exercise to find out the nearest walmart from the origin(i.e. Jersey City here) using haversine formula. For this task, I have taken 4 Walmarts Latitude and Longitudes in a Pandas dataframe as shown in the image below:

Now I want to find out all the Walmarts which is in a Radius of 50Km from the Jersey City. Using the Haversine formula explained above it returned two walmarts from the above dataframe, One Walmart is in New York and the other one is in Bayonne which is within the radius we are looking for since both New York and Bayonne lies within a radial distance of 50 Kms from Jersey City.

We have seen how to calculate the distance between two points or Geo-Coordinates using MYSQL and Python. There are three different abstractions which are used for calculating these distance, Pythagoras theorem works fine for the smaller distance between two points and for more accurate solution geodesic distance is used using python’s geopy module and haversine formula or MYSQL st_distance_sphere is used for a spherical distance where we consider the earths plane as a sphere .