Accessing a single value or setting up the value of single row is sometime required when we doesn’t want to create a new Dataframe for just updating that single cell value. There are indexing and slicing methods available but to access a single cell values there are Pandas in-built functions at and iat.

Since indexing with [] must handle a lot of cases (single-label access, slicing, boolean indexing, etc.), it has a bit of overhead in order to figure out what you’re asking for. If you only want to access a scalar value, the fastest way is to use the at and iat methods, which are implemented on all of the data structures.

Similarly to loc, at provides label based scalar lookups, while, iat provides integer based lookups analogously to iloc

Found a very Good explanation in one of the StackOverflow Answers which I wanted to Quote here:

There are two primary ways that pandas makes selections from a DataFrame.

By Label By Integer Location

There are three primary indexers for pandas. We have the indexing operator itself (the brackets []), .loc, and .iloc. Let’s summarize them:

Never used .at or .iat as they add no additional functionality and with just a small performance increase. I would discourage their use unless you have a very time-sensitive application. Regardless, we have their summary:

Now let’s update the only NaN value in this dataframe to 50 , which is located at cell 1,1 i,e Index 1 and Column A

From the above dataframe, Let’s access the cell value of 1,2 i.e Index 1 and Column 2 i.e Col C

iat - Access a single value for a row/column pair by integer position. Use iat if you only need to get or set a single value in a DataFrame or Series.

Select rows in a MultiIndex Dataframe

Pandas xs Extract a particular cross section from a Series/DataFrame. This method takes a key argument to select data at a particular level of a MultiIndex. 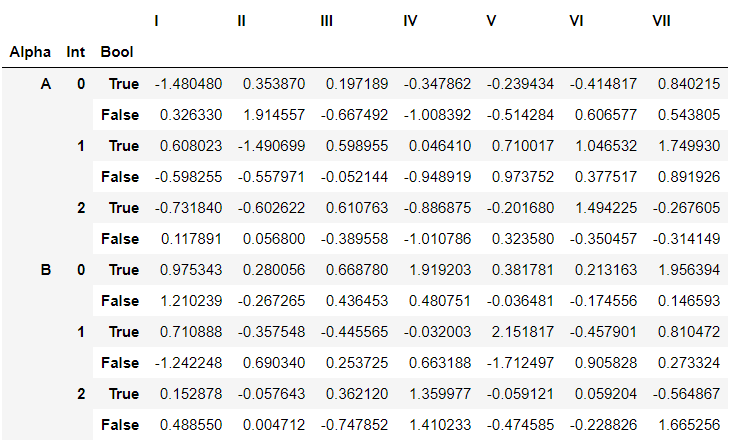 Access Alpha = ‘B’ and Bool == False and Column III

So you have seen how you can access a cell value and update it using at and iat which is meant to access a scalar, that is, a single element in the dataframe, while loc and ilocare meant to access several elements at the same time, potentially to perform vectorized operations. at Works very similar to loc for scalar indexers. Cannot operate on array indexers.Advantage over loc is that this is faster. Similarly, iat Works similarly to iloc but both of them only selects a single scalar value. Further to this you can read this blog on how to update the row and column values based on conditions.