it’s important to know before modelling that how the variables are correlated, what are the value ranges and how it is effected by the time period. Is the data is consistent and uniform and many more aspects of a data can be learnt using Graphical analysis

For this post we are going to use the Airline Passenger data from this Kaggle link: 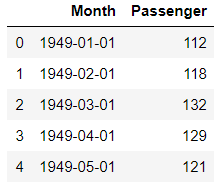 This dataset is nicely formatted and sampled and is in a much better shape. We don’t have to worry about missing values, Non discrete data and Outlier detection.

Our first step to visualize this dataset is same as any other dataset i.e. to plot a simple line plot

This is a univariate data so we will have Month on X-axis and Number of Passengers on Y-Axis. We can also choose the linestyle, marker color for each data points and marker size as well

This plot is quite informative and we can see an upward trend here. With every passing years the passenger count is increasing and there is a seasonality in data also

What is Seasonality? Every year the passenger counts increases for a month and then goes down again and same effect is repeated every year

Let’s continue our Exploratory Analysis and we will resample this data Quarterly i.e. 3 months and then visualize it on a Quarterly data plot 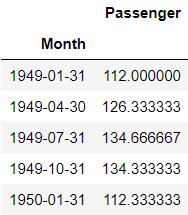 This looks more clear and the Quarterly data points i.e. Red markers are visible for each year. However the trend and Seasonality in the data is same as seen above

A Scatter plot in time series is as important than with any other data. Here we are plotting the difference between adjacent time points using Pandas diff() function and plotted a diff plot between passenger and GDP

This data looks bit informative and we can see there is a correlation with GDP and Passenger count. So what we are interested to find out here is How a change in GDP will impact the Passengers travelling in airplanes

Another Aspect of this graph is the negative change in GDP also sees some surge in Passenger count so there is a correlation but the relationship are not as strong.

Can we forecast the passenger count based on the change in GDP?

A lag plot helps to check if a time series data set is random or not. A random data will be evenly spread whereas a shape or trend indicates the data is not random.

It is a scatter plot where one data point is plotted against the other with a fixed amount of lag. So a first order lag plot is using a lag of 1

For plotting lag chart we can use Pandas lag_plot() function. The x-axis contains y(t) and y-axis contains the data point after 1 lag point i.e. y(t+1) 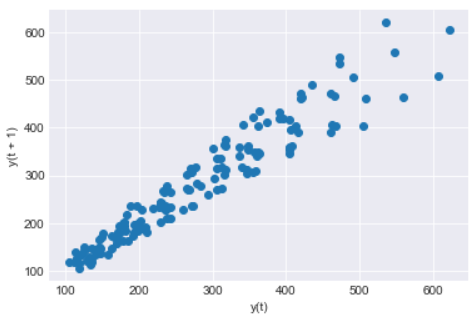 So we can see a linear trend in our data and the data set is not Random. There is no outliers as such also detected in this data set

Lag can also be useful to identify the suitable time series model for the data. So looking at this linear trend for our data a Auto Regressive model will be good 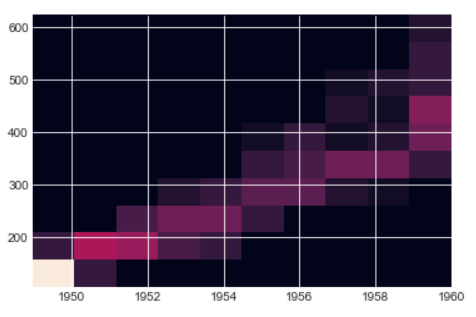 The below hexbin plot looks better than the heatmap and the trend is also quite evident from this hexbin too. You can see growing Passengers with every year 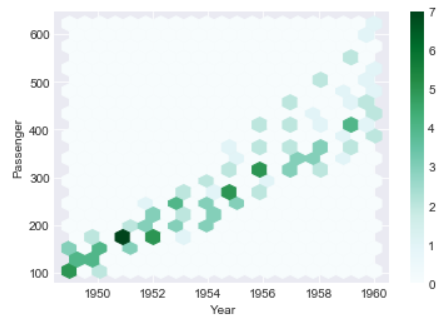 Let’s create two additional columns i.e. Month and Year. We will extract the values of these columns from the Month column

We will plot a 3-Dimension plot of our data using two datetime dimension i.e. X-axis is Month Name and Y-axis is Year and third dimension Z-axis is Number of Passengers 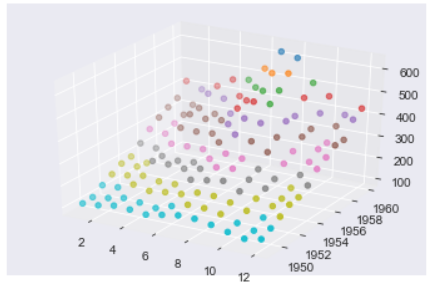 Moving Average(MA) and Exponential Weighted Moving Average(EWMA) is a rolling window function and is very critical steps for time series analysis which is used to aggregate the data and compress it.

These functions are used to smooth the data to remove outliers and noise from the data and allowing the patterns and trends in data more visible and standout. It will smooth out short-term fluctuations and highlight longer-term trends or cycles

Moving Average is calculated by taking the mean of set of data within a fixed window size in a data set. The window size can start from 2 onwards

Let’s calculate the moving average of Passenger column in our dataset with a window size of 3 . We will calculate the average of the passengers count for every 3 months and store it in a new column called Rolling Mean

Exponential Smoothing(EWMA) unlike moving average which doesn’t treat all the data points equally while smoothing. Most of the time in a Time series data we want to treat the most recent data with more weight than the previous data

n EWMA we are weighting the more recent points higher than the lags or lesser recent points. You can read more about smoothing and EWMA in this post

Let’s Calculate the EWMA for our data using Pandas ewm() function with a smoothing level of 0.6. You can try with different alpha levels and check the output and use the most appropriate alpha level for your data

This is a line graph with three lines. Blue line shows the original data and red is for rolling mean with a window of 3 and green is for EWMA with a alpha 0.6

We will draw a box plot grouped by Year to visualize the data distribution for Passenger count by Year .

Now we will check the Seasonality and Trend in data. In a time series , variations which occurs due to some factors (maybe natural) and operate in a regular and periodic manner over a span of less than or equal to one year is called as Seasonality

Whereas Trend in a time series shows an increasing, decreasing trend in the data over a long period of time

For Time Series modelling the trend and Seasonality should be eliminated from the data before hand. There are models like SARIMA which can handle Seasonality in the data but most of the models doesn’t

Per Year Month on Month Count

In this plot we will have Month on the X-axis and Passenger count on the Y-axis and plot a line graph for each of the year . Every year the passenger surge can be seen for July and August and drop in demand in December and again surge during Christmas and New Year

This graphs shows us more about the Seasonality in the data

Per Month of Years on Years Plot

In this plot we will have Years on X-axis and Passenger count for each Month on Y-axis. We can see very year there is an increasing trend of passengers. The line for two months i.e. July and August shows more faster growth rate than the other months

ACF measures the linear relationships between observations at different time lags. In other words ACF is used to understand if there exists a correlation between a time series data point with another point as a function of their time difference

ACF is also called as Correlogram and a Correlogram for a Stationary process is used to Interpret Random Series, Short term correlation and Alternation Series

We will be using statsmodel Graphics API’s to plot the correlation graphs. It basically uses the matplotlib cross-correlation (xcorr) and auto correlation(acorr) under the hood. Check this matplotlib documenation

We have total 20 lags on X-axis and auto Correlation on the Y-axis and the line at Y=0 is the mean. All the correlation values are above the mean and a positive value 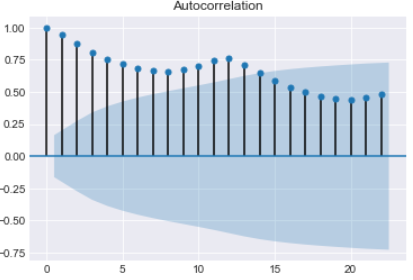 The Partial Auto Correlation factor(PACF) is the partial correlation between the two points at a specific lag of time. plotting the partial autocorrelative functions one could determine the appropriate lags p in an AR (p) model or in an extended ARIMA (p,d,q) model

For an Autoregressive AR (p) process, the partial autocorrelation(pacf) function is defined as the value of the last coefficient(alpha-p) 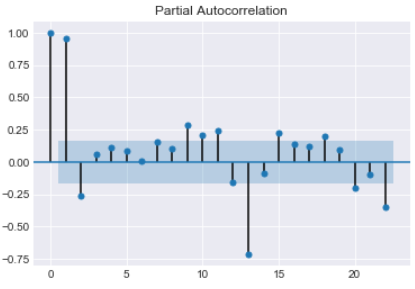 In this article, we will see how to create a grouped bar chart and stacked chart using multiple columns of a pandas dataframe Here are the steps that we wil...

How to Append dictionary to a dataframe in pandas

In this article, we will see how to append a dictionary to a dataframe, we could either append dictionary as rows or as a new column to the dataframe Here a...

In this article, we will see how to drop rows of a Pandas dataframe based on conditions. Additionally, we will also discuss on how to drop by index, by condi...

In this post we will see how to use mataplotlib xticks locators and formatters to place the ticks every hour or every 15/30 minutes on a plot. we will use t...